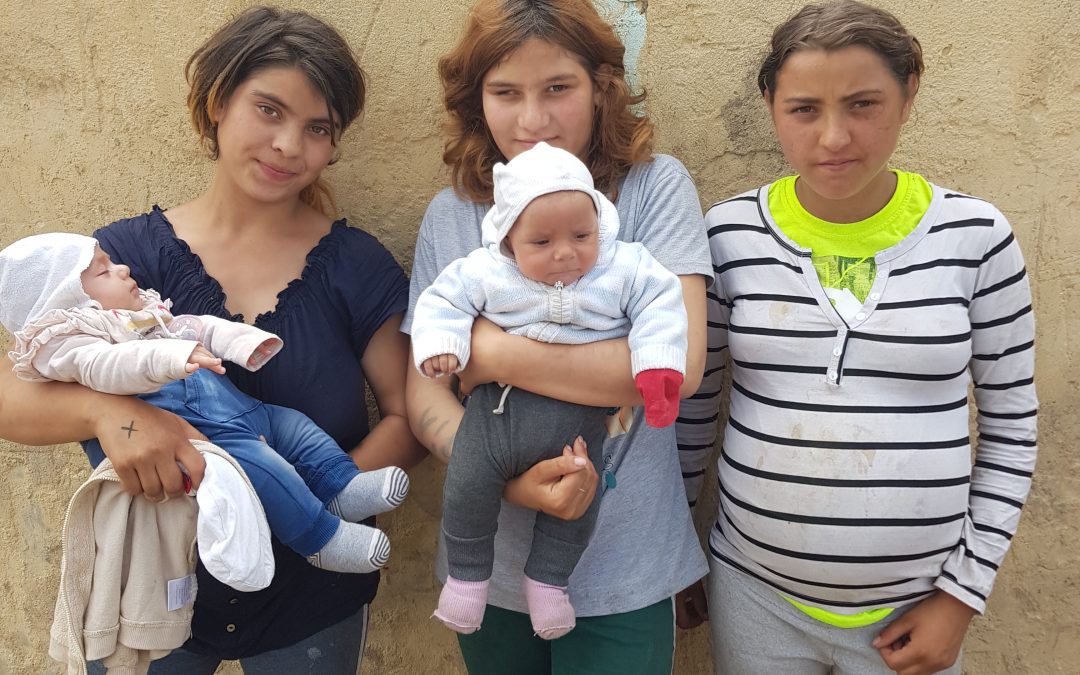 The temperature gauge in the car showed minus ten this morning when I set off. I was thankful for my winter coat which took the edge off the chill. It didn’t stop the pain creeping into my nose, or the tears forming in my eyes from the bite in the air. It’s only a three-minute drive to the Roma community with no time at all for the heat to warm up the car. I’ve been coming to this village for seven years now and many faces have become familiar. Names have been learned, friendships have developed, programs have come (and gone), houses have been built, resources distributed and yet, the need is still overwhelming.

Reconnect with the teenage mothers

There was no program scheduled today. It was just a time to reconnect with some teenage mothers after I had been away for Christmas. We normally meet once a week together in our centre but it’s valuable to be with them in their homes too. These mothers had their childhoods stripped away years too soon. The pandemic hit Romania, school transferred online for many across the country but our kids and youth had little or no access. Living in a one room house with between two and ten siblings, there weren’t too many of our children who had tablets, laptops or internet access – some don’t even have electricity. And so, with too much time on their hands, we found ourselves with a group of teenage mothers who should have been attending class seven, instead of having their bodies grow and flourish in preparation for nurturing a baby.

For a season I visited them in their homes individually but quickly realised how much they were all struggling with similar issues and needed community. There were many tears shed and regrets of what had happened. But there could be no return. They couldn’t hand these little ones back and go to school again. They had taken on great responsibility when hasty decisions were made nine months previously. And now they would live with the consequences. So, our small group of teenage mothers aged between twelve and eighteen was established. Before they had their babies we discussed much about what life would be like, yet there was no preparing them for the shock of motherhood and all that lay before them.

Second baby in one year

Now, fast forward a year, and we’re back to this morning. I wandered through the village to wish these young mothers a “Happy New Year,” whilst trying to avoid the dogs at the same time. I managed to see most of them but some had already up and left for the day to get wood in the forest or help with chores at their mother-in-law’s. One girl wasn’t there as she is currently in hospital having given birth to her second baby in one year. Last Spring she gave birth in a field after the hospital told her she would have another few weeks to go. She went to help her partner with the cows and started going into labour the next day. The following months were exceptionally difficult for her as she struggled to produce enough milk and find money for formula powder; it is still an ongoing battle. Before she had fully recovered from the trauma of this, she discovered that she was expecting again. And so, with her hands full already, she will return home tomorrow to a ten-month-old son bringing her three-day old daughter into a one-roomed house made from mud and sticks that has rodent visitors on a daily basis. She has just turned sixteen. Life is heart-wrenchingly hard at times.

The hardship of watching them raise little ones

My heart carries much sorrow for these girls. The pain of knowing the potential within them and how much they’ve given away – and given up on. The frustration of not knowing how far they could have gone had the pandemic not come. The hardship of watching them raise little ones; learning how to change nappies and breastfeed when they should be in school, learning their times tables and Romanian grammar. And yet there is hope. When we gather once a week at our Education Centre there are opportunities to speak life and truth into these young hearts. We share stories and laugh together. We reminisce of how children’s camps were some of the happiest moments in their lives. We talk about ‘the good old school days.’ We just live life together, journeying through the moments of pain and celebration together.

The program exists because, despite all the circumstances, the girls deserve to be loved and cherished. To know that they are wanted. To know that they can have a future and a purpose in life. To provide a safe place for them to play with their children. To develop healthy relationships with them. To encourage attachment and a love-bond between them and their children. To keep practising their reading and writing skills. To share the message of hope found in the Gospel so that in time we would see young Christian mothers raising the next generation.

Sarah is originally from Northern Ireland and serving in Romania at present. She is with Restore Ministries, YWAM Romania.