New sound of YWAM in Greece 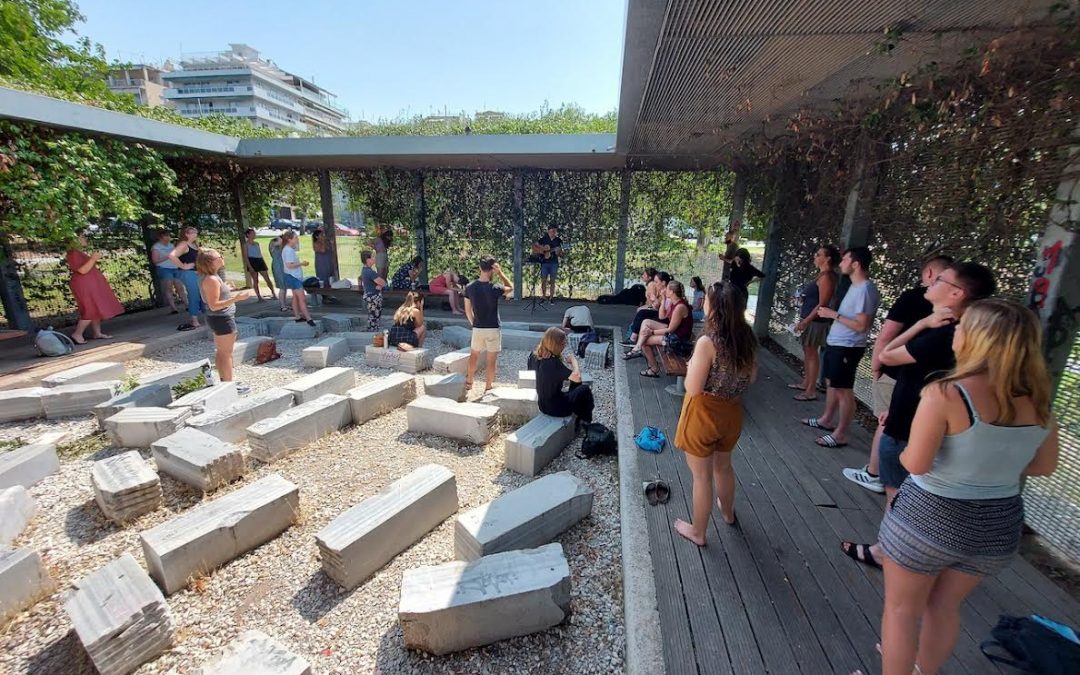 Nikos Kazantzakis, the famous Greek writer, once said about his homeland: “Greece still survives… I think it survives through successive miracles.”

We all had a pandemic to worry about, and in the midst of that chaos and darkness, as always, God spoke.

His invitation to all YWAMers in Greece at that time was clear:

“Unite in one location to work together.”

It took another 6 months of prayer and fasting, zoom calls, tears, questions, doubts and dependence on Him, until it was evident: we were to come together in Thessaloniki.

YWAM Lesvos packed up everything, tied all loose ends, closed the base and came in the North, to join the team in Thessaloniki.

It felt like two people dancing awkwardly to a divine song that no one knew the steps to.

That’s what we decided to explore: the new sound.

What does YWAM look like serving alongside Greeks, serving and mobilising Greeks?

How can YWAM DNA, tools and values be used in a Greek context to equip the generations to go to their own spheres, cities, villages, islands, and to the nations to preach the good news?

These questions seem to have remained unanswered for decades, ever since YWAM first tried to pioneer in Greece.

My husband and I were hesitant and weary: we are not the “new hot stuff”, we are two Greeks who love this nation and want the Kingdom to be built here. We knew that if YWAM Thessaloniki was to be part of the building process, God needed to be composing this new song.

We started working together -YWAM Thessaloniki and YWAM Lesvos- officially, back in April 2021. None of us had heard of anything like that happening recently in YWAM. There was no model we had to go off of, no previous wisdom to rely on, no guidance from those who have gone before on that same path. Therefore, naturally, these were the perfect conditions for the Holy Spirit’s guidance to come through and lead us to discern, as one unit now, the good, pleasing and perfect will of our Father as to how we are to “unite and work together in the same place”.

Step one was to form a new leadership team.

We did a scary thing: the whole community prayed, short term staff, long term staff, previous leaders and even visitors. Specifically, we felt led by God to ask everyone of them to pray and ask God if they themselves were to be on the leadership team, if yes then why and if not, why and who was to be on that team. This process was one of the most astonishing and breathtaking corporate times any of us have ever been a part of, where a large group of people attempted to discern God’s will together. The picture of us all gathered together was very much what we read in Acts. The outcome was a team chosen by all and confirmed by all through pictures, songs, verses, dreams etc.

Step two was to articulate God’s invitation into a vision statement and determine for how long we were to work together.

“YWAM Thessaloniki is modelling unity and discovering the New Sound of YWAM in Greece, to see lasting transformation of the city, nation, and beyond, serving in an effective and sustainable way.” This is the vision statement for the next… 1000 days. That’s how long God has led us to officially be together.

So, even though this vision statement has an expiration date, once this new sound becomes distinct and recognizable the vision statement will become even broader to encompass all that God will use YWAM to do for the sake of the Kingdom.

Circling back to Kazantzakis, we indeed have seen miracles on miracles, so much favour and grace and most of all we have come to understand Paul’s heart when he was speaking to the Thessalonians:

“Instead, we were like young children among you. Just as a nursing mother cares for her children, so we cared for you. Because we loved you so much, we were delighted to share with you not only the gospel of God but our lives as well. Surely you remember, brothers and sisters, our toil and hardship; we worked night and day in order not to be a burden to anyone while we preached the gospel of God to you. You are witnesses, and so is God, of how holy, righteous and blameless we were among you who believed. For you know that we dealt with each of you as a father deals with his own children, encouraging, comforting and urging you to live lives worthy of God, who calls you into his kingdom and glory. And we also thank God continually because, when you received the word of God, which you heard from us, you accepted it not as a human word, but as it actually is, the word of God, which is indeed at work in you who believe.”

Would you like to know what it feels like to minister to the Thessalonians? That’s precisely what it feels like. Paul’s words ring true to this very day and our love for this city and this nation along with our joy before the Lord is genuine for we know that God will continue the good work He started in our nation until the Kingdom is built here.

If you enjoyed the story of the becoming of our team and want to learn more details, and if you want to know more about our 1000 day journey, find us on our social media: @ywamthessaloniki (Instagram and Facebook) and on our website: www.ywamthessaloniki.org.