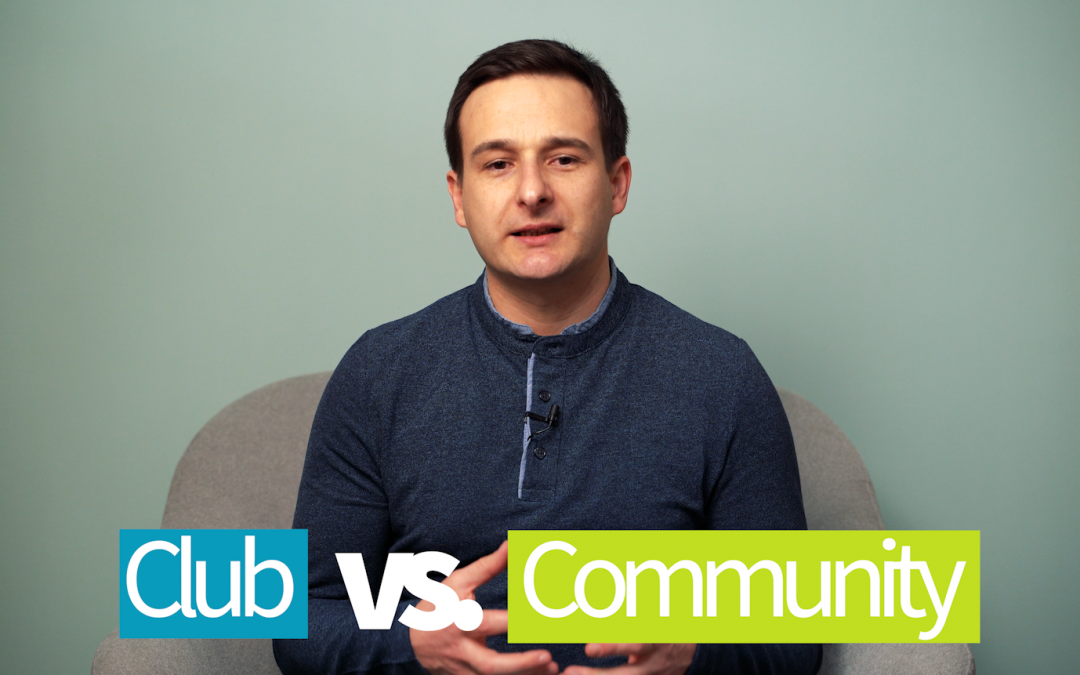 Community is and always will be essential in any society, despite the temptation of individualism and all the ambitions that some people have to become stars and rise above other people.

People want to come together in smaller or bigger groups, even in virtual spaces. Actually, social media wants to imitate community and authentic relationships to fulfill a human need to be together and belong.

Still, if people gather together for something, i.e. an event, a program, some activity (even regularly), this does not mean that these people necessarily form a community, whether we are talking about a club, a company, an organization or a church.

Now I would like to put ‘community’ face to face with something that often just imitates community, namely ‘the club’, and compare the two.

I noticed 8 relevant aspects and invite you to reflect on your family, company, organization or church, which you are part of and if it looks more like a community or a club.

The club is not necessarily something negative, but can definitely not replace the community.  We can pretend that we are a community, but in reality we just have a club.

For example, some churches still consider themselves a living community of believers, even if it has become just a religious club. Although it has a big name and a glorious past.

While the community is a group of people that have some things in common, some people are reunited based on some common things. The club is a platform or an association meant to create conditions for its members to carry out certain activities, usually in their free time.

Often with a club, in the local context, where the activity takes place, for example, a sports club, dance club, book club etc., the emphasis falls on an activity and place.

Both community and the club have their purpose and role, but let’s see why one is more essential than the other.

The Community is about people – The Club is about the activity the people do.

You need both but in the right order because people are more important than the activity.

To be and to do. It is normal to want to do things but let’s not forget to be first and not to reduce a person to what they do, as if they’re a car, a tool or an instrument.

When we are well, we can do good. When we are not well inside it is difficult to do something truly good on the outside.

It’s risky to base our identity, value and importance on what we are doing.

(Often we forget that people have value and importance and can do something valuable and important. Humans are created in God’s image and likeness and Christ has given every person dignity and a meaningful life. When a person is doing something good in medicine, technology, sport or in another field, they express what is already valuable in them.)

How do you know when two people from the same company, organization or church belong to a club or a community? Do they spend some free time together? Are their discussions just about the activity that bring them together or are they also talking about personal things, about life?

What we are doing is important, but who we are is even more important.

Any activity pursues a concrete goal and result, a precise, even measurable impact. But out of the desire to be efficient and productive, often the performance is done at the expense of their relationships, to their detriment.

We can see this in the work place, in business and in other places of society, even in families and churches. Many times the pressure of results causes many victims and a lot of wounds.

The leaders and organizers have a big responsibility not to sacrifice people, relationships and community for their own ambitions and their own benefit. This causes the consequence of the next point.

Those who lead the club are seen as more important than the club members.

A leader or a handful of people are more important than all the members while in a community, the emphasis falls on all its members because every member is important;

Leaders should be the ones who serve others in a community, for others’ interests, not to control them, manipulate them, use them, or take advantage of them, but for people’s benefit and for community purposes.

Some leaders tend to control members and to exclude nonconformists while others will empower members and will include everyone, including the difficult ones.

Many times it can be a ‘one man show’, so when a boss or leader is not there, the activity you go for is no longer attractive.

In community, each person matters. Every person is important and is naturally encouraged to contribute something significant.

So, in community each person is an active participant, each one contributes for the benefit of others, whereas in the club, most of them are consumers because only 10% of the people do 90% of the activity.

Some could say that this imbalance shows a lack of volunteers and in the end, a leadership problem. The truth is, it’s a problem with the system, meaning that, you may have leaders and quality members but if the system they are caught in and maintain is not allowing all members to participate actively, it is wrong.

By definition, a place is essential for a club, the premises are indispensable and the club has life only when an activity exists inside the premises.  The community doesn’t depend on a place. It can have many locations and it can exist without any special place.

In a club the activity is very limited to time and space and to programs and club premises, unlike the community which can have unlimited activity. When people gather together and even when they are scattered and not part of a ‘program’, they are still community because the life of community lies in each member and in the relationships between them, even when they are not together.

Finally, the club is focused on itself. It exists and is special because of the members, whereas the community has two focuses, both the members and others. A healthy community cares about those outside it.

We could continue to compare but in conclusion, we notice that the club, even if it is useful, is something quite artificial, while the community is something organic, with a lot of life, and with greater potential when it is not reduced to a simple club as cultural, economic or religious.

What is your opinion? What dominates in our culture? Community or club?

What does our family, company and church look like?

Mihail Bogdan is a pioneer having seen YWAM Craiova growing from the team of 3 that first set there feet on the ground, to a dynamic team with great ministries in Craiova and around the Balkans. Mihail is married to Ema and together they have two wonderful children.