The story from in front of a fireplace: A man who met Jesus! 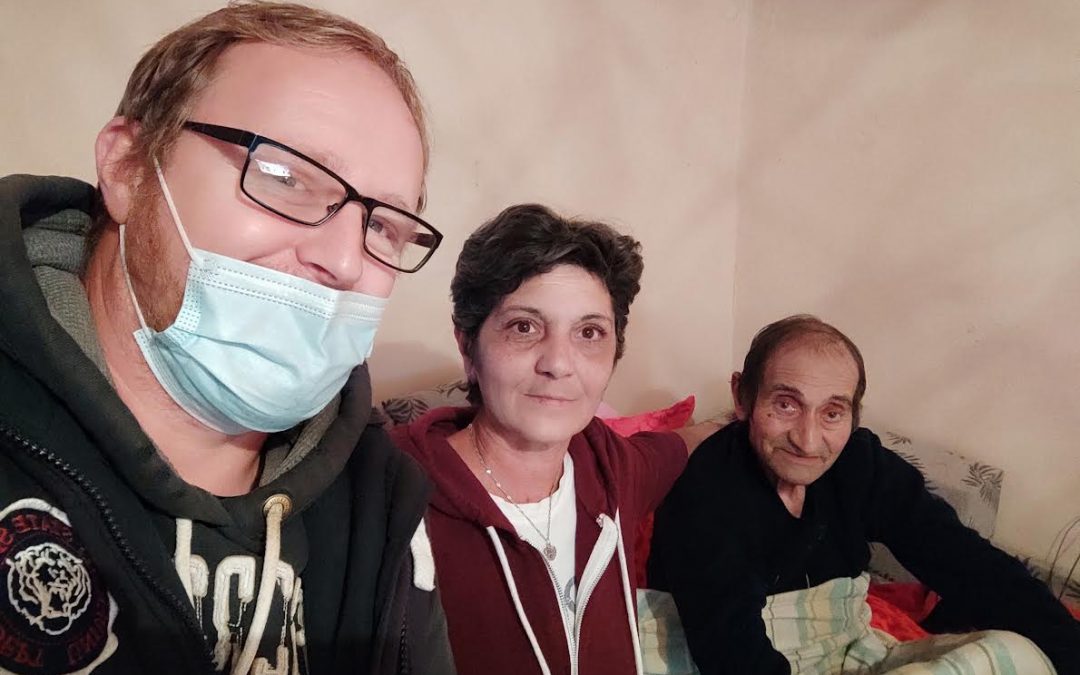 March 2020 – all of Europe entered into lockdown; beyond our continent more than half the world had locked down, even though comparatively few people had been diagnosed with COVID at that stage.

In fact, COVID did not start as suddenly as it seemed. In hindsight we should have been wise to recognise that it would spread far beyond China – yet some were sure that it wouldn’t. However, it did arrive in Europe and, because of lockdowns, all our ministry projects and plans came to an abrupt halt. But God’s heart for us was not to stop loving and helping people so we prayed and asked Him how we could be a blessing in the situation. And of course, God was faithful to show us.

We started to visit and help families who lived in real poverty – most of them unemployed yet trying every day to find work and make some money. In lockdown they ended up having no income. Many families were in this situation and, in partnership with a local church and some individuals, we started to help

One day we visited a local man and he asked us to call in with his neighbour, at that time called Mr Gheorghe, who was extremely ill and wanted to receive prayer. On that first call, our staff member found a scared old man pinned in his bed. The doctors had diagnosed him with cancer and given him only a few more months to live.

During the follow-up visit, I (Dani) was invited to see him and his family and to pray for them. We found the same scared old man in his bed, but this time with a desire to know God. His wife, who was born again, died 20 years ago She had invited him to go to church with her, but he did not want to. Now, being in a desperate situation, he remembered his wife’s words.

In talking with him, we discovered that God had visited Mr Gheorghe during the night, to say that some people would come to teach about Himself. We have been so encouraged to share the Good News, to pray with him and lead him to Christ. He was so happy to pray with us and to receive God in his heart. He related that when we prayed, he felt a warmth in his body. We left our new brother Gheorghe’s house with the promise to return and to discuss at the church about the possibility for him to get baptized.

A few weeks later, after the restrictions had lessened, we visited him with someone from church and he was baptised. His daughter was so happy that day because, she said later, it was his last wish – everyone expected him to die.

Weeks and months passed and brother Georghe was still alive, but moreover, his health improved. This improvement was so dramatic that the doctor took away medical devices that he had been using to survive – God had healed him! Not only could he get out of bed, but he could leave the house – God raised him from his bed to be a living witness of His power in the whole neighbourhood. Many of his neighbours, knowing the diagnosis he had received, recognised that God did a miracle.

Others from the locality have asked us to visit and pray for them and tell them about Jesus. Some are treating Jesus like Santa Claus, just wanting to receive healing and blessing but not willing to change their lives. Others have open hearts and are starting to seek God.

A few days ago, I visited brother Gheorghe. He did not feel so good, his health started to deteriorate again. He was scared because his daughter (who took care of him all this time) planned to leave the country for a few weeks. We talked about the Good Shepherd who is with us in every moment, no matter the circumstances. We prayed together and we hope and believe that God will help him be victorious through this. He is one of God’s lights in that area.

He has a wonderful family, especially his daughter Mona, who takes care of him, she is a special woman. God started to work in her heart, but I will tell you more about her in the next story from in front of the fireplace.

Until then, pray with us for brother Gherghe and the ministry in this locality of Medias where he lives.

Daniel Pop, DTS in Medias, 2010. He’s married to beautiful Lidia and has two amazing kids, Natanael and Sara. His passion is to invest in young people, he’s a good teacher and loves nature. They’re just building their own house, and in doing so they are learning how hard but beautiful is to build a legacy.