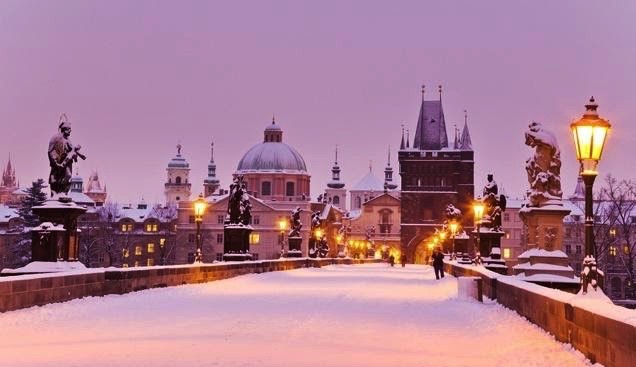 It was Christmas eve, 50 years ago. Back then the country was called Czechoslovakia and it was behind a border that was known as the “Iron Curtain.” Carolyn and I were newly married and had recently joined Brother Andrew’s little band of smugglers. On this trip we were joined by our good friends, Joe and Judy Portale.  Snow lightly covered the road we were traveling on and we had quite a distance to get to our destination in the north, called Moravia.

The guards at the border where we had just crossed over from Germany were benevolent that day as it was Christmas Eve and even though they were Communists, their nicer selves came out as they waved us through the normally strict border. Of course, we attributed this to the heavy duty praying we had done before the crossing, asking God to blind the eyes of the guards. Our car was packed with Bibles and some suitcases with a very special cargo.

Some weeks before a merchant from the North of Holland called and asked if anyone was going East in the near future. He had a lot of beautiful winter clothes and God had put it on his heart that perhaps there was a need that this could meet, so we had several suitcases besides our own in the back of the vehicle.

After a long day drive, we arrived at our destination just as it was getting dark. I knocked at the door of a house that was conveniently hidden on a quiet street. The kindly man, a Moravian pastor, invited us into their home. They were in the middle of their Christmas Eve celebration that they called “the love feast.” When I shared with him that we had brought Bibles, he was so happy, but when I told him we had brought some winter clothes, surprisingly, he was even more happy.

He explained to us that the Bibles and the clothes were headed for Russia and that the very next day they would be on their way. Our timing was God ordained. We continued to celebrate with the family with a fresh carp that had been kept in the bath tub until it was time to be baked and served. There were oranges in a bowl on the table that were a once-a-year treat. We finished the night off with breaking a special wafer and passing it around sharing good thoughts toward each other.

It was some years later when Carolyn and I were once again in Czechoslovakia, in the beautiful city of Prague, we called our friend to tell him we were in the city when he excitedly told us to get to their house as quickly as possible. He was with us that special Christmas Eve long ago as a boy, now he was grown and was himself a pastor in the city. When we arrived at his house, he excitedly brought us to his friends, a couple who had just arrived from the Soviet Union.

He introduced us to them saying, “These are the people who brought the winter clothes”. They teared up and began to hug us. The young lady then told us her story: “We are the family of Joseph Bondorenko,” (a well-known evangelist who had spent many years in prison for his preaching of the Word), “That Christmas they came and arrested him once again and to punish him more severely, they took everything we owned, including our clothes. They left us totally destitute.  Then these suitcases arrived, filled with the most beautiful winter clothes. It was a Christmas gift we would never forget, thank you, thank you, thank you.”

The story above is true! All the characters in the story had a role to play, the merchant with his generosity and obedience to call us. We obeyed the call to go, specifically on Christmas eve. The kindly pastor who welcomed us into his home and knew that there was something more to this visit and the timeliness of it. God was the director, bringing all these events together to bless this family. Often people have asked us, what were you doing on such and such a night? We had a burden to pray for you. All of us are an important part of a God directed team and have a role in building the Kingdom.

Al and Carolyn both started in YWAM as teenagers in 1964 /1966. In 1973, they started YWAM Slavic Ministries as a ministry to reach out to that part of the world in discipleship and evangelism. Doors were quickly opened all over Central Europe, particularly in Poland, Czechoslovakia, Hungary, and Yugoslavia.

They continue to have a heart for Central Europe, particularly in seeing new bases and ministries raised up. Their hearts are into apostolic pioneering and want to see more training and releasing in that area.