What can I say about YWAM Together 2018? I was part of the organising team after being invited by Rebecca Gibbons (who used to be in the Czech Republic and we worked together as the CE communications team until she moved to Thailand in 2012). It was a privilege to be part of such a well-run event. There were almost 4000 people from over 100 nations and 77 languages, including over 300 from secure nations, and yet even with tight security and loads of people, everything more or less ran like clockwork. 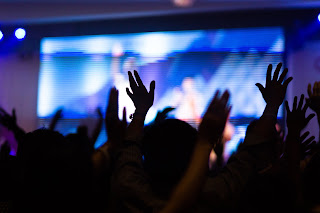 There were amazing speakers, worship by teams from all across the globe, and cultural dances from many nations. It was wonderful to see how many of the people up on stage were not Westerners and when they were there, they were often translating into English instead of being the main speaker. That says something!

The theme of the whole conference came from Revelation 4:1 “Come up here, and I will show you what must take place after this.” I felt that this is what heaven would look like – so many different nations together in one place and worshipping Him!

In the middle of the conference they sent everyone out into Pattaya city to do some sort of outreach – from prison ministry to schools, to bible distribution. Seriously well organised – sending out 3500 people!! Here are some of the statistics from that day: 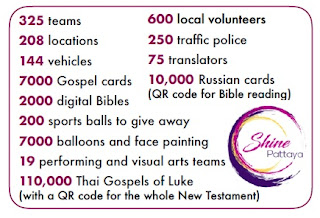 This should be the way we do conferences: sending everyone out in the middle to reach out to the people in that place! What an impact!

On the day after the conference finished, I was part of a gathering of leaders from all over the world. It was the main reason I went – to be a part of that meeting on behalf of Central Europe. And out of the over 100 leaders there, I just happened to sit at the table with our founders, Loren and Darlene Cunningham and some other senior leaders. It was completely by accident and it was so wonderful to be able to share with them some of the things going on in our region since they were with us in 2016. And also to be able to hear from them and other leaders directly about how the new Area Circle Teams are supposed to function. What a privilege!

I am still reeling from all that happened in that week, and even though it was a lot to take in, I am so glad that I had the opportunity to be a part of this amazing gathering.

Otherwise, I leave you with the highlight video of the whole week… it is amazing and gives a feel for what it was like to have so many people from so many different countries together in one place: Enjoy!