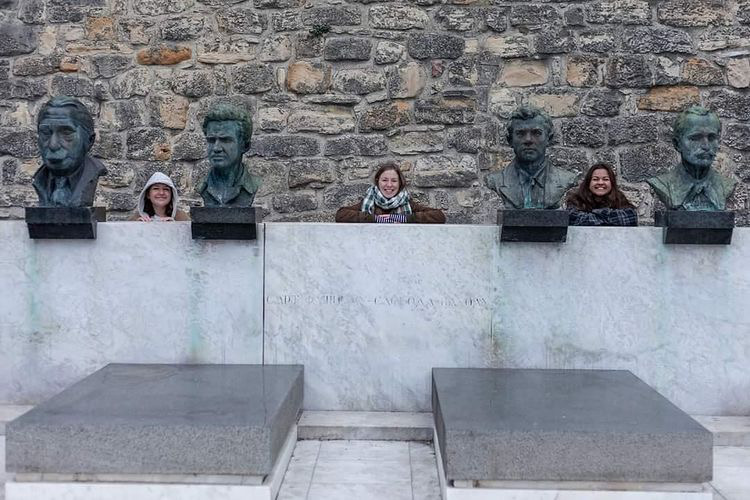 If you are currently or ever have been a pioneering location, you know how much of a blessing outreach teams are to smaller locations. They bring a fresh perspective and people who are willing and excited to serve in new ways! We were blessed to have two teams from YWAM Paris Connect come serve alongside us in YWAM Serbia for a total of two months.

I haven’t spent much time in Belgrade, but from the times I have been there it has always made a good impression on me. I am far from what people would call a “city girl,” so big cities like Belgrade usually intimidate me. Belgrade is different, though. Somehow there is still a small-town vibe to it. People aren’t too busy to see the beauty around them or to sit and have coffee for two hours. The Serbian culture flows through the capital just as it does in any other town you might visit in Serbia. I truly love these stories that made an impression on the Paris team; it shows that I’m not the only one who feels this way.

“During our outreach we had the amazing opportunity to sing an impromptu worship song at a local Serbian Orthodox Church.

“This particular afternoon was rainy, but we prayed as a group and felt led to evangelize at a park and bring our guitalele (cross between a guitar and ukulele) and hearts ready for worship. Upon arrival at the park, we noticed a small church residing in the center. Earlier, Jadena (one of the leaders) received a word that we should worship and pray to bring revival/revolution to the Serbian church. Since none of us were particularly fond of the idea of singing in the rain (lol), we sought shelter at the church.

“In the building, we met a man working there and shared with him the words we received for the church, talking with him about God’s love and prayer for the Serbian faith. He then shared with us that he had been feeling the exact same way – that the Serbian church needs a revival! After praying for him and encouraging him, he requested us to play a worship song and sing in the church!

“It was a beautiful display of God’s love for the church in Belgrade. He is bringing revival to the Serbian faith! What a special experience!”

It was a big deal that they were not only allowed to play in the church but invited to play. Many of us live in nations where the church is at the center of the culture and the people don’t see that change is needed. Or maybe they are afraid of what that change might look like and what might have to change in their own lives. Either way, this man was different, and it is a testimony of how God has been moving in Serbia.

“April 6 – Jamie, Salomé, and Eliana were worshipping at Kalemegdan Park for an hour or so when they felt the Lord was leading them to switch locations (a specific location with some bust statues) for one last song. After singing one or two more songs in the new location, they were stopped by a man with a camera who had been observing nearby. He came up to them and asked, “Do you know what monument this is?” He then continued by explaining how the monument with the statues was to commemorate some famous Serbian war heroes… and the exact day we were there, April 6, was the anniversary of the NATO bombings. The man explained that he was moved by the fact that the girls were singing at this monument on this specific day. And they didn’t even know the significance of the day or the monument! The Lord led them there!

“The man then asked if he could photograph the girls at this monument, and explain why they were there… It was a neat opportunity to share the gospel and the love of Jesus to this man and any others who might hear about what he encountered that day.”

I love this testimony because it is a great example of why we should listen to what the Lord is saying to us. Maybe some things He asks of us don’t make sense, but if we are obedient, we have the chance to touch other people’s lives and share His love with them in ways we couldn’t have had we not obeyed Him. We won’t always know why He asks us to do the things He asks, but it will always pay off in the end.

We are incredibly grateful to have had this team bless the nation of Serbia as well as share their stories with us.

Taylor Smith lives in Užice, Serbia, and works with YWAM there. She is originally from Texas and is instrumental to the work God is doing in Serbia. She has a big, honest, and open heart, that draws others to her quickly and makes them feel safe. Her vision is to reach women, particularly through anti-human trafficking and counseling ministries https://www.taylorslifeoverseas.com