Fishers of Men – aka the Worship Warship 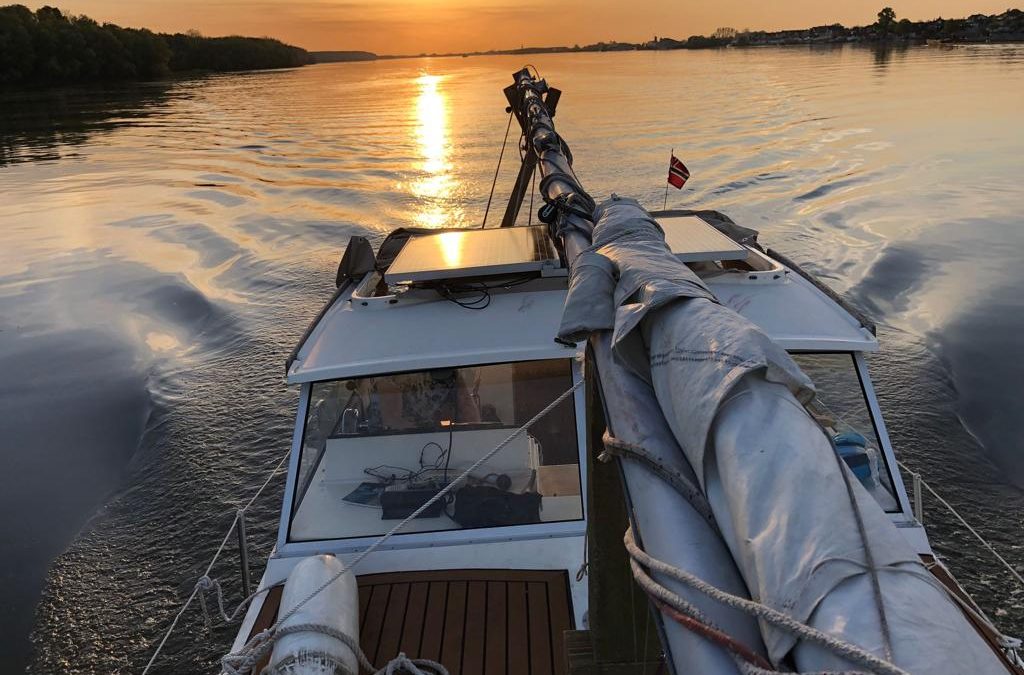 “The earth is the Lords and the fullness thereof, the earth and all that fills it.

In April 2022 (by faith and with money the Lord provided) we bought a 29ft sailboat in Croatia (Finnish built motorsailer and under a Norwegian flag) and had it transported on a truck to the Croatian city of Vukovar where it was lifted onto the Danube River (Donau) by crane.

The Danube river begins in Germany in the area of the Black Forest and flows all the way down to the Black Sea through and along the borders of Austria, Slovakia, Hungary, Croatia, Serbia, Bulgaria, Romania, Moldova and Ukraine. It is the second longest river in Europe and has many large cities along its banks. The river has been witness to many atrocities and much suffering throughout the entirety of the long and bloody history of Europe.

Before the journey began we didn’t have much of an idea about what God or we were going to do along the way but there were some Bible passages that really stuck out to us.

One of them was from Isaiah 61 where it says “The spirit of the sovereign Lord is upon me because He has anointed me to preach good news to the poor, He has sent me to bind up the broken-hearted, to announce liberty for the captives, the opening of the prison for those who are bound and to PROCLAIM THE YEAR OF THE LORDS FAVOUR.”

In addition (and in going with the river theme) there was the story from Ezekiel 47 where it talks about the river of life that flows out from the temple and even the salt water is turned to fresh water because; “wherever the river flows there is LIFE!” It talks also specifically about the great numbers of fish that will abound in this river!

In the course of the  1200 km  we have now traveled on it, we have met many interesting people, shared about Jesus, blown the shofar and prayed for the cities and the countries we have passed through. God even opened up the possibility for us to share about the journey and worship on national TV in Serbia whilst we were in Belgrade!

The crew onboard the boat consisted of up to 7 people (most have been from Norway plus also some from America and New Zealand.)

We felt that God gave the name for the boat; ‘Fishers of Men’ – these words are of course most recognisable from the gospel accounts of Matthew and Mark where Jesus calls Simon and Andrew to follow him, however there is another reason why we believe God was pointing out this name and the reason is found in Jeremiah 16:14-16.

In this passage God talks about how He will bring His people Israel out of the lands of the north and back to the land He have to their forefathers – in order to bring this about He says that He will send for many ‘fishers’ to fish for them and afterwards He will send for many hunters to hunt for them. Regardless of the method, God will gather His people Israel back to the land of Israel – we live in the days when this is happening and we believe and pray that God will in some way allow this little boat to be involved in His BIG fishing operation… what this will look like we don’t know, but God will reveal it in time.

We believe a part of God’s plan for the boat is to have young people onboard  (specifically from the Nordic nations) to worship and pray through the rivers of Europe and also the Black Sea and Mediterranean. These are areas that were frequently visited and traveled through by the vikings when they journeyed out from Scandinavia (They often traveled along the Danube).

The boat represents in many ways a new type of ‘upside down viking-ship’ for the new wave of missionaries that God will be sending out from Scandinavia in the coming years – young people filled with His Spirit and empowered to be a blessing and expand His Kingdom on the earth!

Jesus often traveled on and even preached from small boats on the sea of Galilee, also Paul and many others spread the Gospel by simply traveling by way of the sea as they went around sharing about the Lord, encouraging local churches and discipling along the way – God is not finished with boats!

We pray that the boat will be a carrier of the Good News of the gospel and be a blessing in all the different areas it passes through and to everyone who is coming in contact with the people onboard it.

Right now the boat is tied up in the small town of Isaccea on the Romanian side of the Danube river opposite Ukraine – this is a border crossing where a ferry is transporting everyday many Ukrainian refugees into Romania. The boat has already had quite a few people sleep on it whilst they have been volunteering in the refugee receiving centre at the border.

Interestingly enough, the boat is located right where the delta of the Danube river is begins – this is also the least evangelised area of Romania, maybe the Lord has some dreams for the boat to be involved in helping to carry the gospel into this delta region?

Exactly what God has ahead for this/His boat is currently unknown but we are praying that He will help us to clearly see it and will lead us into it in His timing.

What we do know is this: the Lord is building up His highways back to Zion in preparation for His coming return to reign as King – we trust and pray that like John the Baptist this little boat can serve as a witness to the Light, by going before Him and ‘preparing the way for the Lord’ in every place it passes through!

Blessings from the Worship Warship crew! 😀