A Passion for Jesus that never fades 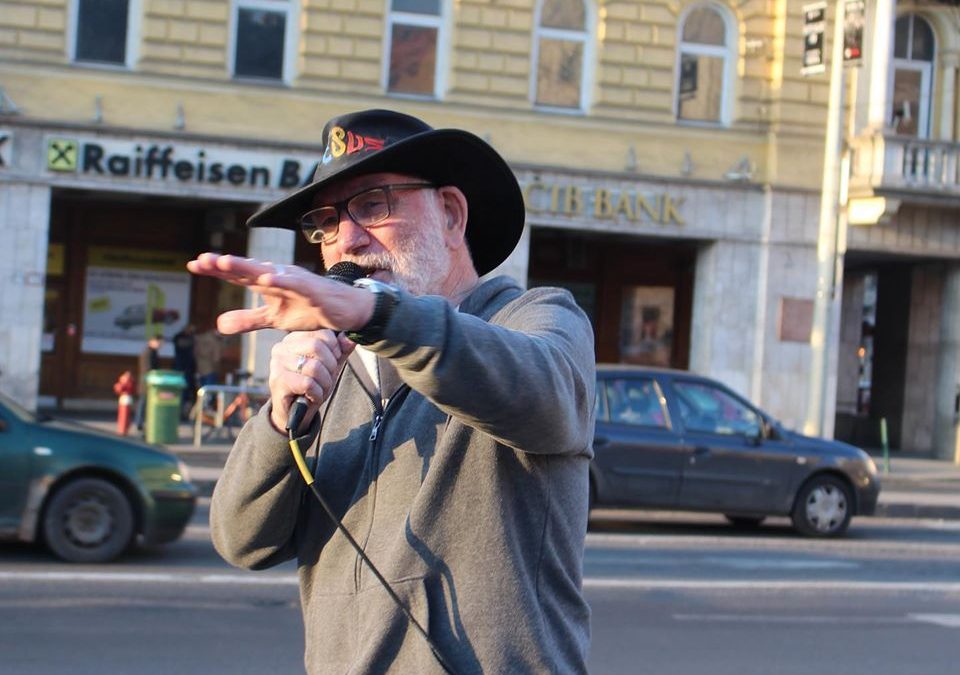 For today’s blog we’ll take a virtual trip to Budapest, Hungary to meet with the oldest YWAMer in our region. If you’ve ever been to Budapest with an outreach team then there’s no doubt you’ve crossed paths with him. Maybe he even got you to help him do the Cupid Shuffle during street evangelism, heard him play his banjo, and witnessed him preaching.

You might have guessed that we are talking about Terry Williams.

So where does Terry Williams come from?
I was born in Sneinton, a suburb of Nottingham in 1940, during World War II. I come from a slum family. My mom was poor, she was what people called a charlady. She would go to rich people’s houses to clean. I had many “uncles” who would show up in our house so it’s not a surprise that I’m the result of a one-night stand, I don’t know who my father is. I had a sister who was 3 years older and she was the one who looked after me.

I never had a present for Christmas, only hand-me-downs from what the rich people’s kids would give me. I was born next door to the founder of the Salvation Army, William Booth. I lived a few doors away from where he was born. Many people think that he’s from London but he went there later in his life because he saw the poverty and many needs there.

Growing up in the slums of Nottingham I learned how to fight for myself. I’ve done a lot of bad things to survive- you name it I’ve done it. In time, I became really good at fighting but always got into trouble. I even went to prison for a while. People nowadays don’t know what it is to live in slums. I just existed in them days! That was my life growing up!

But then something good happened to you because you found hope in Jesus! How did that happen?

One day after my wife had left me I saw one of my gang friends, John Goodfellow, on the television. He was doing a drama to the Bible in the streets of Nottingham. I went to find him, wondering if he’d still remember me, and you have to know that everybody remembered Terry Williams with his “big mouth”. It was great to see him and he invited me to Amsterdam. So me and my son went to see him.

When we got there he said, “We are going to a Love Feast, would you like to come?” I didn’t know what a Love Feast was, I thought it was you know the other kind of love and free food, so I was in (laughing). When we got there, there was this giant of a man, called Floyd McClung. He stood in the middle of the room and talked to us. While he was talking I got this funny feeling inside me. A lot of people who’ve experienced this know what I’m talking about. I felt I was flying.

John Goodfellow asked me, “How are you feeling Terry?”

When I went back to England I went back to the pub, ‘cuz that’s where I was every day and I said to all the fellows there, “Hey, I’ve become a Christian!”

“You’ll be back gambling with us in 3 weeks,” they said. That was almost 36 years ago.

I did my DTS in YWAM Amsterdam1985 and I joined the evangelism team afterwards. After my DTS I went back to Nottingham to raise support. My home church couldn’t support me financially but I told everybody I knew what I was going to do. Some people only gave me a gift of 1 Pound a month and in 6 weeks I was ready to go back. That’s how I started.

Can you remember what was your favorite ministry during your DTS?

Preaching! I wanted to convert all of Amsterdam.

What are some of your talents?

I’m a clown. My name is Mr. Whatzit because I always used to say, what’s it. Oh, you see what’s it over there, or what’s it is coming tomorrow. I’ve always liked Bluegrass music so while I was in Amsterdam, Sam Waddell, another good friend of mine went with me to get my first banjo.

Another hobby of yours is to do beautiful calligraphy signs. Where did you learn that?

It was in prison. One of the other inmates was writing and so I wanted to learn that as well. Now, I’m getting old and making a lot of mistakes but I’m still enjoying it.

Who are the people who have inspired you? Who do you look up to, besides Jesus of course?

At the moment you live in Budapest, Hungary. You’ve been here for 17 years doing street evangelism and you have quite the memorable attire. Can you describe it to our readers?

I always wear a cowboy hat with Jesus (sewn) on it. I always wear t-shirts that say, “Body piercing saved my life” and I play my banjo.

What is a word of wisdom you want to share with the people who are reading this article?
Always be ready to preach, pray or die at a moment’s notice!

I kept to that my whole life!

On behalf of YWAM Central Europe we want to thank Terry Williams for his years of faithfulness and serving on the streets of Budapest. You are a true hero of heart. We appreciate you and all your are- your visdom and youthful heart. We are grateful for your example as a man of God who walks the talk. Thank you Terry!

Also, a big thanks to Misha for doing this interview and giving us a glimpse into Terry’s life. Great work! Thank you!